< Back to Main Blog Page

ExactAsk is changing the way nonprofits and public broadcasting stations are approaching fundraising. Using their patented machine-learning algorithm, ExactAsk's predictive analytics software platform is able to take a nonprofit's existing donor list and predict a tailored ask amount for each individual donor, maximizing fundraising results. Rather than sending generic ask amounts to donors based on general information such as wealth data, demographics and location, ExactAsk enables fundraising teams to pinpoint an amount each donor can reasonably be expected to give in response to current, and future campaigns.

In today’s shifting political landscape, the need for public broadcasting stations to leverage the most from their donors has never been greater or more pressing. A new Federal budget is anticipated to be presented within the first forty-five days of Donald Trump's presidency. Unfortunately, The National Endowment for the Arts (NEA) and The Corporation for Public Broadcasting (CPB) has been deemed frivolous by officials close to the administration.

The new budget is designed to reduce spending by $10.5 trillion over the next decade, and the NEA's and CPB's relatively small, but vitally important chunk of the Federal budget is now on the chopping block.

The good news is that ExactAsk can easily be integrated into any kind of marketing campaign, from direct mail to email, social media and video. Using ExactAsk is a cost-effective way for development teams to be confident that their fundraising campaigns are as fruitful as possible. Partnering with ExactAsk leads to better, more focused results with a quicker turnaround time and very little additional effort for the development team.

Other solutions rely on the purchasing of bulk information, which churns out piles of data that can take months to deliver. ExactAsk, however, uses the donor data the public broadcasting station already has, and provides actionable steps focused on annual giving within just a few days. Donor giving willingness is also measured and tracked, so the client doesn’t have to worry about ask amounts alienating donors in the long run.

The process, form a client's perspective, is streamlined and intuitive. Simply upload donor data into ExactAsk's platform, allow the algorithm to do its job, and receive and distribute predicted ask amounts. After the campaign is complete, users will be able to easily calculate the boost in revenue brought about by ExactAsk's personalized ask amounts.

ExactAsk was able to increase revenue by 17.5% across six different fundraising campaign case studies, from clients like Habitat for Humanity and the Special Olympics, to Idaho Public TV and the Austin, Texas PBS affiliate, KLRU-TV. When contacted with a personalized Ask amount, donors across all segments of giving (lapsed, recurring, new, etc.) gave $0.35 more on average than their previous donation per send. Compare this jump in individual contribution to the one penny increase that traditional requests based solely on income had yielded. Over the long run, that $0.35 difference adds up to impressive gains for each client.

Idaho Public TV, after experiencing a dip in giving through their email campaigns, partnered with ExactAsk for an upcoming direct mail campaign and was able to raise an additional $4,700 from their relatively small donor base. The near five thousand dollar increase was achieved with only half of IPTV's donor list receiving a personalized ask amount. Even so, IPTV saw a 380% ROI that left them eager to incorporate ExactAsk into every one of their fundraising campaigns moving forward.

Habitat for Humanity partnered with ExactAsk for an email campaign and a separate, long-term direct mail campaign. The average gift size increased by $163.27, thanks to a 106% jump in the average give amount for those who received personalized ask amounts, when compared to the donor's last gift. For those who were targeted with the traditional ask amount, the average increase was far less inspiring, at just 15%. Habitat for Humanity wanted to better maximize their donor's giving, and thanks to ExactAsk they were able to raise an additional $9,470 and experience a 250% ROI.

The proposed Federal budget aligns closely to one published by the Heritage Foundation, a conservative think-tank, last year. The Heritage Foundation holds a considerable amount of power within the current administration, as they were instrumental in the staffing of the Trump transition team. Their budget calls for the CPB to be privatized, and the NEA and the National Endowment for the Humanities to be eliminated entirely.

In 2016, the Federal appropriation for the CPB was $445 million, which is distributed to stations nationwide, based on need. Were the CPB to be privatized, it would have a huge impact on the fundraising demands of public broadcasting stations across the country.

The federal investment in public media is vital seed money — especially for stations located in rural America, and those serving underserved populations where the appropriation counts for 40-50% of their budget,” a spokesman for the CPB said. “The loss of this seed money would have a devastating effect. These stations would have to raise approximately 200% more in private donations to replace the federal investment. Moreover, the entire public media service would be severely debilitated.”

Drastic proposals like these are not new, as noted by Patrick Butler, CEO and president of America's Public Television Stations, who says propositions to privatize the CPB “have been circulating around Washington for years and have been soundly rejected on a bipartisan basis.” In fact, a 2015 Republican-controlled House voted down a similar proposal 132-294. What is unprecedented, though, is the language and vitriol coming from those people president Trump is relying heavily on.

Brian Darling, a former staffer at the Heritage Foundation, recently said, “The Trump Administration needs to reform and cut spending dramatically, and targeting waste like the National Endowment for the Arts and National Endowment for the Humanities would be a good first step in showing that the Trump Administration is serious about radically reforming the federal budget.”

The real reasons for their desire to eliminate and privatize these longstanding institutions can be debated ad nauseam, but the one irrefutable fact is those who rely on this type of funding need to prepare for the worst. ExactAsk could be the lifeline public broadcasting stations are looking for.

A prime example of just how beneficial ExactAsk can be for public broadcasting entities is Austin's PBS affiliate, KLRU-TV. Just sixteen days after implementation, KLRU was able to boost campaign revenue by 76%. With a minuscule cost of ten cents per predicted ask amount, KLRU made an additional $3,142 and experienced an enormous 400% ROI in a little more than two weeks. The only thing that changed from their previous fundraising campaign was their partnership with ExactAsk and the use of personalized ask amounts.

After receiving the predicted ask amounts just two days after uploading their data to ExactAsk, it took about two hours for the staff at KLRU to create and implement the personalized ask amounts into emails and landing pages for the campaign.

Recipients of targeted ask amounts increased their donation amount by $33 over the previous, identical campaign, while those who received the generic ask amount only raised their average gift by $16. The average gift size for the treatment group was also significantly higher than that of the control group, at $129 compared to the control group's $85.

Susannah Winslow, Membership Director at KLRU, was elated to have partnered with ExactAsk, “Working with ExactAsk was very easy. They guided us through the process step by step and were really great about answering all of our questions along the way,” Winslow said. “They were knowledgeable about the tools we specifically use at our station, which helped put our minds at ease, knowing we could successfully integrate our tools with their product. It was wonderful to partner with them on this campaign!”

The Right Solution at the Right Time

As a new federal budget looms on the horizon, threatening the livelihood of nonprofits and public broadcasting stations in dire ways, ExactAsk is the perfect way to ensure fundraising campaigns are as fruitful as they can possibly be. With a proven track record of maximizing revenue and providing a great return on investment, achieved with hardly any extra time or effort required on the client's part, ExactAsk is the perfect weapon to combat the privatization and stripping of federal funding for public broadcasting stations.

Interested in utilizing ExactAsk for your fundraising campaigns? Schedule a demo today. 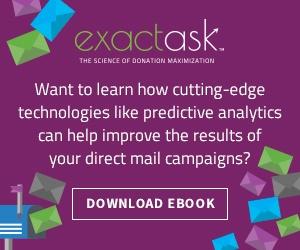 Merely matching your donors to a generic “profile” is no longer enough. Your organization deserves better accuracy driven by better technology.

Backed by science, ExactAsk’s sophisticated algorithms determine the most precise ask amount for your fundraising campaigns.

With a few clicks of your mouse, you can start influencing exactly how much your current donors give.